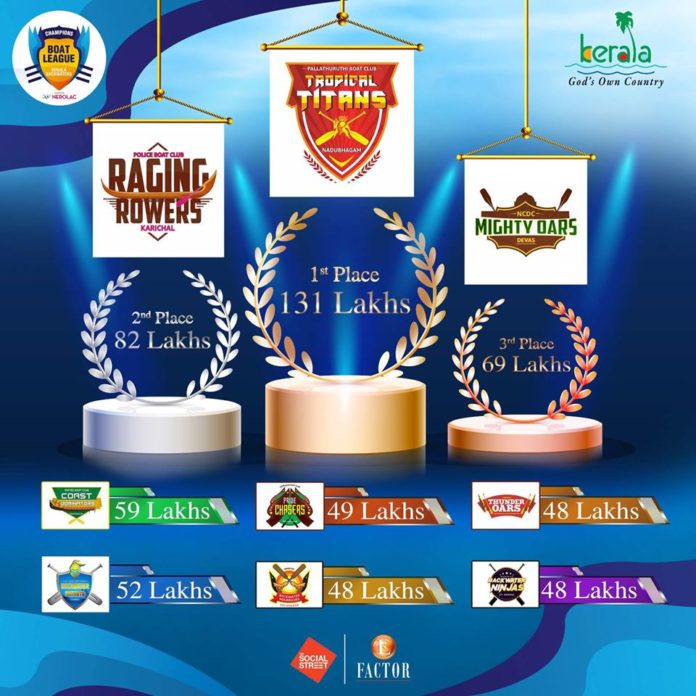 Kochi: Tropical Titans, winners of the inaugural edition of just-concluded Champions Boat League (CBL), earned close to a quarter of the prize monies by mustering Rs 131 lakh of the total Rs 5.9 crore that was up for grabs in the spectacular event in Kerala’s backwaters.

The champions, who had come first in all but one of the 12 rounds of the nine-team CBL that ended at Kollam on November 23, collected 22.2 percent of the purse.

The Kerala Tourism-organised event modelled on IPL cricket has its rules mandating payment of Rs 4 lakh per round for any participant. The total prizes of Rs 5.9 crore made CBL the fourth-highest paid tournament in the country.

The teams that got the minimum assured Rs 48 lakh were Backwater Warriors (seventh), Thunder Oars (eighth) and Backwater Ninjas (ninth).

The total prize thus ended up at Rs 5.86 crore, as Coast Dominators were not paid their Rs 4 lakh on October 12 at Kottapuram near Kodungallur in Thrissur district as they opted out after the heats, displeased by the imposition of a penalty. Incidentally, Coast Dominators were the only team who managed to outsmart the champions in one round: they came first at Kochi on October 5.

Kerala Tourism Minister Mr. Kadakampally Surendran said the CBL has boosted just not the state’s traditional water sport, but the travel and hospitality industry. “As an annual feature, the tournament will ensure that Kerala’s tourism begins from August,” he noted. “The places around the CBL venues, too, benefit economically from the championship.”

Kerala Tourism Secretary Ms. Rani George said the CBL has succeeded in its aim of reviving Kerala’s traditional snake-boat races with a dose of professionalism. The holding of the CBL in the half-a-dozen district has enabled a comeback of certain traditional boat races that were either losing colour or undergoing a break.

“By reviving them, CBL has become integral to Kerala’s traditional post-monsoon festivities,” she added.

Kerala Tourism Director Mr. Bala Kiran said the CBL has also brought in a new generation of boat-race fans, besides broadening the existing viewer base. “Earlier, snake-boats were largely confined to Alappuzha district. Today, we see them rowing in races farther north and south of the state,” he added.

The league’s next edition will have more venues in upstate Malabar.

To ensure annual holding of the IPL-format boat races, the Tourism Department has formed a company called CBL Limited as a self-sustaining and income-generating company, with an agency consortium, led by E-Factor Entertainment and The Social Street, as consultants.

Kansai Nerolac Paints, which was a key sponsor in the league races held in five districts of the state, said the company constantly works towards developing ideas and initiatives that can help transform lives. “The CBL has given us a beautiful opportunity to connect with the people of Kerala,” said Mr. Peeyush Bachlaus, Assistant Vice-President (Marketing), Kansai Nerolac.

The CBL was inaugurated on August 31 at Alappuzha with cricket icon Sachin Tendulkar as the chief guest.