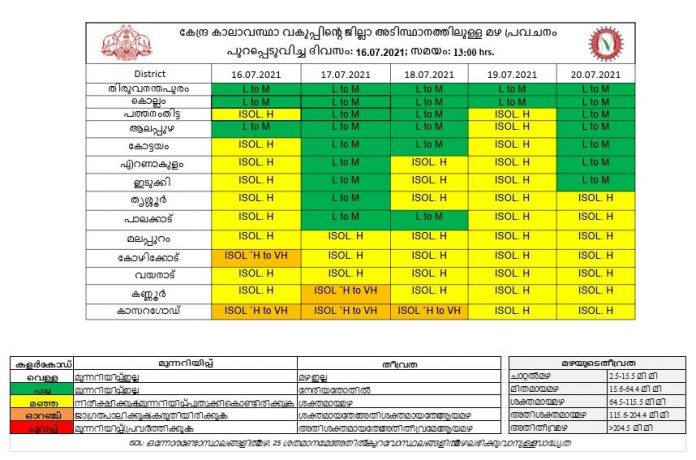 Thiruvananthapuram: There is a possibility of heavy rain in North Kerala today. A yellow alert has been declared in Thrissur, Palakkad, Malappuram, Kozhikode, Wayanad, Kannur, and Kasaragod districts today. The Central Meteorological Department has forecast showers in North and Central Kerala for the next three days due to low pressure from the Karnataka coast to the Kerala coast. Fishing has been banned off the coasts of Kerala, Karnataka, and Lakshadweep.

Meanwhile, the water level in the Kakkayam dam was alerted. But the water level has not risen to the level where the Red Alert should have been declared. Shutters have been warned to open at the Peringalkuthu Dam.

The water from the Peringalkuthu dam will flow into the Chalakudy river from 11 am to 200 cubics this morning. Coastal dwellers are urged to be vigilant as the water level in the river will rise. The water level in the Chalakudy river will rise up to one meter.
Meanwhile, a house collapsed at Kavilumpara in Kozhikode due to heavy rain. The house of Kalaipuzhakkal Kalyani in Kallumpuram Kunnathadam in Kavilumpara panchayath was destroyed. Two children, Vismaya and Fatima, were also injured. The incident took place yesterday evening.