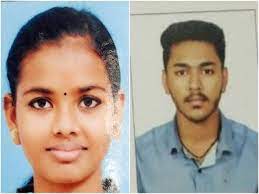 A student in Pala St. Thomas College is strangled to death by a classmate

Kottayam: A student was beheaded by a classmate on the college campus. Nidhina, a native of Vaikom Talayolaparambu, was killed. The incident took place at Pala St. Thomas College.

The killer Abhishek Baiju from Koothattukulam was taken into custody. According to reports, Abhishek confessed to police that he killed Nidhina due to love failure. Abhishek is Nidhina’s classmate. Nidhina was stabbed by Abhishek after the supplementary examination. She was rushed to the hospital but could not be rescued.