Kathmandu: Heavy rains continue in Nepal. At least 60 people have been killed in heavy rains and landslides. 41 people are reported missing. The search for the victims continues in the Magdi district of Nepal, which has been hit hard by heavy rains. So far 27 people have lost their lives in the district.

Following the landslide, entire houses in two wards of the district were destroyed. About 100 people have been evacuated from the two wards so far. They are being housed in schools and primary health centers in the area, officials said. 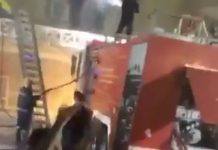 Passenger flights from India and Pakistan banned in Canada