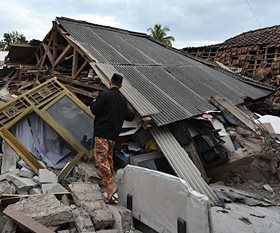 268 killed in Indonesian earthquake; Many of the dead were school children

Jakarta: The death toll from Wednesday’s earthquake in Java, Indonesia has risen to 268. The number of injured is over a thousand. 151 people are missing. 22,000 houses were damaged. 58,000 people were shifted to relief camps.

Indonesia’s disaster management agency said the dead included many school children.The earthquake measuring 5.6 on the Richter scale occurred around 1 pm. Schools were not open at this time. Many children were trapped in the rubble of school buildings.

The earthquake hit the highlands of Java, causing widespread landslides. A village inside Cianjur town was completely submerged. Several aftershocks compounded the impact of the disaster. President Joko Widodo visited the disaster area yesterday. He said that priority is given to rescuing those trapped in the debris.

California: Seven people were killed in a shooting in Half Moon Bay, California, USA. Foreign media reports that the...
- Advertisment -