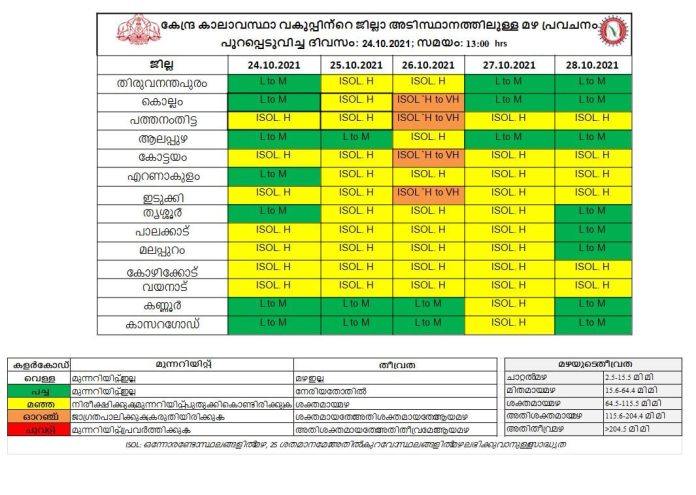 Thiruvananthapuram: There is a possibility of heavy rain in the state in the afternoon. There is no warning of heavy rain anywhere but there is a possibility of widespread rain. A yellow alert has been declared in seven districts namely Pathanamthitta, Kottayam, Idukki, Palakkad, Malappuram, Kozhikode, and Wayanad. Chance of isolated heavy rain. Chance of thunderstorms and strong winds. Those in hilly areas should be careful. The rain was caused by a cyclone near the coast of Lakshadweep.

The meteorological office has announced that the Thulam year will begin in Kerala on Tuesday. The monsoon will recede completely within the next 48 hours. A yellow alert will be issued in 11 districts tomorrow. The eastern region of Kottayam is on high alert in the wake of rain warnings. No heavy rain was recorded in the area during the night. There was drizzle in isolated places.

Heavy rains lashed low-lying areas of Kanjirapally and Mundakkayam areas for half an hour yesterday evening. The landslide occurred in an uninhabited area in Mundakkayam Vandamtapal. The blockade at the Chembakappara estate in Erumeli broke down. As the water level in Manimalayam rose and the tributaries overflowed, people were shifted to relief camps along the coast. At present, there are 36 camps in the Kottayam district.