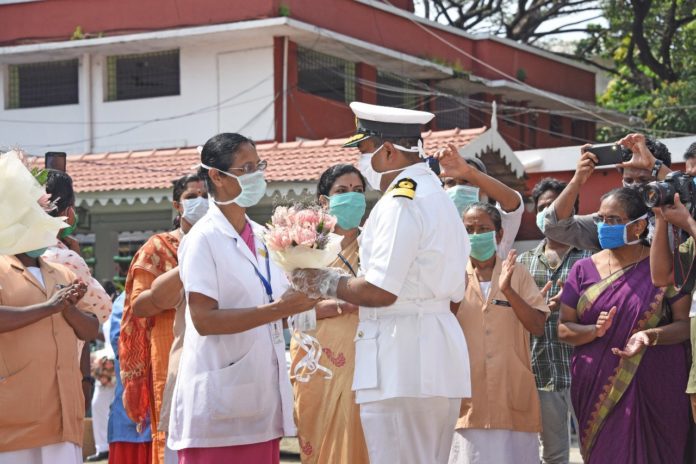 At 10 am, the three army chiefs started the event by presenting a wreath at the Delhi Police Memorial. In Delhi, Sukhoi 30 aircraft and MiG-29s flew flyposts at Rajpath and flourished from India Gate to Red Fort. The flypast is at Dal Lake in Srinagar and Sukhna Lake in Chandigarh.

The flypast took place on Marine Drive in Mumbai. The flowering of the Air Force took place at 10.30 am in Itanagar, Guwahati, Shillong, and Kolkata.

Five ships of the Mumbai Gateway of India illuminated from 7.30 pm to 11.59 pm. The ships also display a poster titled ‘India bowing down Corona fighters’. In addition to lighting the ships, the Goa Naval Base will also build a human chain to honor the Corona fighters.

Indian Army pays tribute to police officers who have been at the forefront of Covid’s defense Brigadier Karthik Seshadri, Commander of the Pangode Military Station, presented the cake to State Police Chief Loknath Behra at a function held at the Thiruvananthapuram Police Headquarters. The army also handed over gloves, masks, and children’s greeting cards to the police.

Brigadier Karthik Seshadri said that police work is highly valued by health workers, sanitation workers, and various government agencies who are at the forefront of the fight against Covid. He also praised the role of the police force in combating the virus and implementing lockdown. State Police Chief Loknath Behra congratulated the Army for its initiative to honor the police throughout the country.

Facebook
Twitter
Pinterest
WhatsApp
Previous articleMember of Lokpal, A K.Tripathi died of COVID-19
Next articleThere is a possibility of heavy rain with a thunderstorm in the state