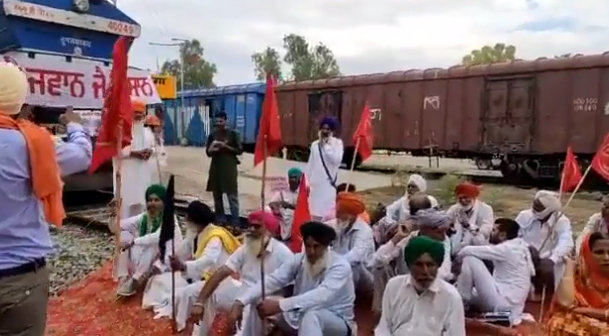 The farmer’s ‘Rail Roko’ agitation demanding the resignation of Union Home Minister Ajay Mishra has intensified. Nationwide, farmers blockaded the train for 6 hours. About 50 trains were blocked by farmers in northern India.

The Samyukta Kisan Morcha said the strike would continue till the farmers get justice. Farmers across the country blockaded the railways demanding strong action against the culprits in the Lakhimpur massacre.

The strike was called by farmers’ organizations demanding the resignation of Union Home Minister Ajay Mishra. Farmers across the country blocked the train from 10 am to 4 pm.

‘Rail roko’ agitation intensified in states including Punjab and Haryana. About 50 trains were blocked by farmers at 130 places on the Northern Railway. About 90 trains were partially halted. 23 trains were suspended and other trains were diverted. A ban has been announced in Lucknow following the farmers’ strike.

While Ajay Mishra remains in the ministry, the farmers are intensifying their agitation by pointing out that a proper investigation into the Lakhimpur massacre will not take place. The farmers have stated that the Mahapanchayat will join Varanasi and Lucknow in the coming days.

The Supreme Court will reconsider the Lakhimpur case on October 20. The Samyukta Kisan Morcha said the strike would continue till the farmers get justice.