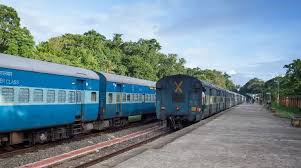 Thiruvananthapuram: Southern Railway has allowed six trains to reduce the rush during the Onam season. Six trains and 10 services have been sanctioned.

Allegations have been raised that this is the first time in Ona season that railways are running such short service.

The train was allotted to Chennai and Bangalore. There are no special trains from Mumbai, Delhi, and Kolkata where there are many Malayalis. Railway authorities have indicated that they are considering allowing more trains.

Special trains have been announced from Ernakulam and Thiruvananthapuram to Velankanni. Ernakulam Junction- Velankanni train will start service next week. The train will leave at noon on August 15 and reach Velankanni at 8.15 am the next day.

The train runs every Monday till September 5. Service via Kottayam. The return train will leave Velankanni at 5.30 pm on August 16 and reach Ernakulam at noon the next day. The service is on every Tuesday till September 6.

Facebook
Twitter
Pinterest
WhatsApp
Previous articleJohnson & Johnson to end the sale of baby talcum powder Globally
Next articleOne India One Charger; The Center is all set to implement a unified charger