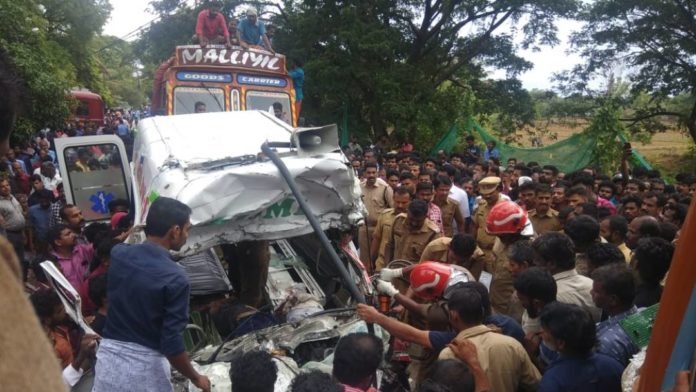 Palakkad: Eight people, including a patient and driver, were killed in a collision with a lorry. Four injured. One’s condition is serious. The ambulance was coming with four injured and drunken youth to Nemmara hospital was met with the accident. The accident occurred near the Thanassery petrol pump near Koduvayoor.

The residents of Vadanankurishi left for Nelliyampathil on Saturday. The accident occurred when the car they were traveling near the wooden lane fell into a 50 ft deep Coca. No one was seriously injured. They reached Nemmara Social Health Center at KSRTC bus from Nelliyampathy. All of them were referred to the District Hospital for scanning. They were taken to Palakkad in the same vehicle in which the ambulance carrying drunken people due to lack of other ambulances.An attempt was made to overturn the bike near Thazhayeswaram and the ambulance were hit by a lorry. In the hit of the collision, the front part of the ambulance collapsed completely. The fire force reached on the spot from Palakkad. The lorry was carrying the fish from Coimbatore to the new city. Two inspectors led by DYSP, CIMs, and six SIs have completed their inspections and inquest the bodies at the District Hospital and handover bodies to the relatives at night after postmortem.