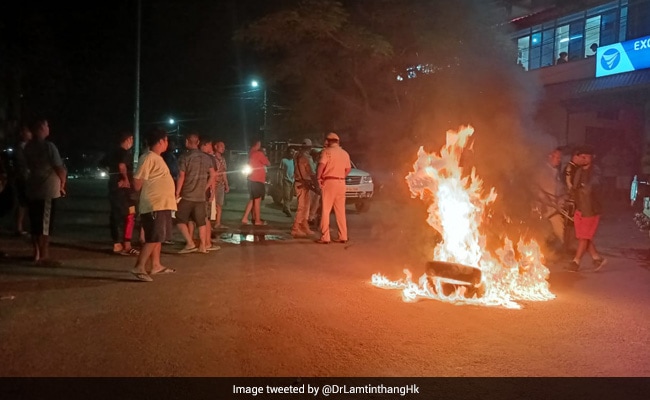 Imphal: Internet service was suspended for five days in Manipur Special Secretary (Home) H Gyan Prakash issued an order in this regard. According to the order, some anti-socials are using social media to spread hate speech which inflames public sentiments. It is also pointed out that this will create communal tension.

Yesterday, 4 people set fire to a vehicle in Phugachao Ikhang. The Superintendent of Police of Vishnupur district had submitted a report showing that this had increased communal tension. Following the order of the Special Secretary. Prohibitory orders under Section 144 CrPC have been imposed in Vishnupur and Churachandpur districts. The order came into force on Saturday evening.

Tension prevailed in the state after the All Tribal Students Union Manipur (ATSUM) on Friday launched an indefinite economic boycott strike on national highways. The student body demands that the Manipur (Hill Area) Autonomous District Council Bill 2021 be introduced in the Assembly. ATSUM says it will provide more financial and administrative autonomy for the development of valley areas.

The Imphal office of ATSUM was shut down on Friday afternoon by an organization called Meite Leepun following an indefinite economic embargo. They claim that the blockade was targeted at the valley region of the state. The N Biren Singh-led BJP government in the state introduced the 6th and 7th Amendment Bills in the Manipur (Hill Area) Zilla Parishad on Tuesday. However, the protesters claim that their demands are not accepted. Since the introduction of the amendment bill, the tribal-dominated Kangpokpi and Senapati areas have been at a standstill since Tuesday.