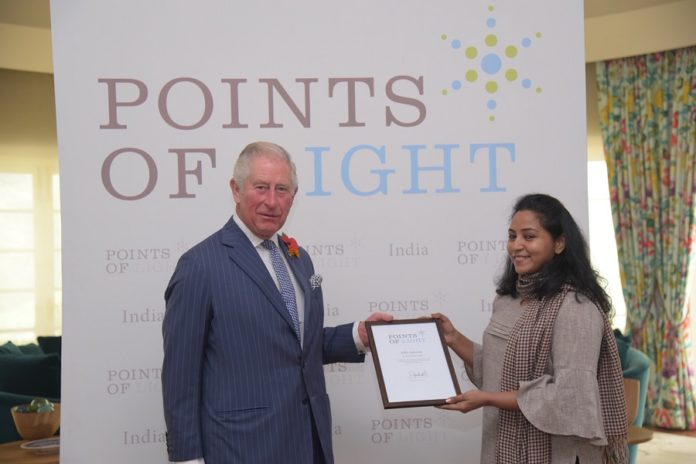 Thiruvananthapuram: Jolly Johnson, founder and CEO of Thiruvananthapuram-based Helping Hands Organisation (H2O) that works for under privileged children with autism, has been awarded the prestigious Commonwealth’s 90th ‘Points of Light’ Award by Prince Charles of Britain for her exceptional work.

The award was presented to Ms Johnson when she met The Prince of Wales at the British High Commission in New Delhi during his visit to India this month.

H2O is a not for profit organization having the support of over 12,000 youth volunteers across the world.

The Points of Light award is given to specific individuals who have been working towards the betterment of the community around them and creating impact.

The award was presented by Prince Charles on behalf of his mother and British Queen Elizabeth II. The citation of the award read: “In recognition of your exceptional service supporting youth social action, you are presented with the Commonwealth’s 90th Points of Light award.”

During the award ceremony, Ms Johnson had the opportunity to speak to the Prince and Sir Dominic Asquith, the British High Commissioner to India.

“It feels very good to be recognised for the effort my team and I have put in, away from the limelight for most part. It allows us to spread more awareness about autism as well as get more youth involved in helping us make societies accepting of children with disabilities,” she said, expressing her gratitude and happiness at being selected for the award.

With regard to the large youth volunteers she has been able to mobilise for the cause, the founder of H2O said, “Our volunteers are our strength. This generation has the inherent ambition to do good and be impactful – all they need is a nudge. Our volunteers have worked day and night to help our children. This award is a big boost for them.”

The British High Commissioner was particularly impressed by H2O’s efforts in trying to make the beneficiaries employable. Prince Charles was both happy and curious to know more about H2O’s initiatives in addressing the climate crisis by raising awareness and planting Oxy-bamboo trees across Idukki and Thiruvananthapuram.

A Science and MBA graduate with an immense interest in Social and Developmental work, Social Entrepreneurship and Social Psychology, Ms Johnson also dabbles in writing on issues pertinent to her area of work.