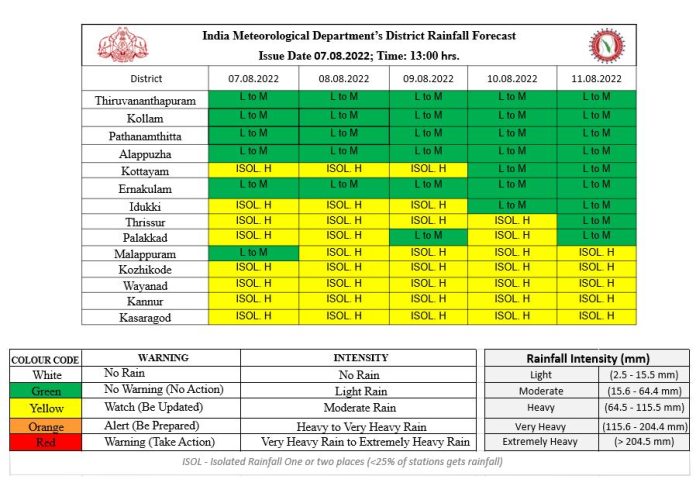 Kottayam, Idukki, Thrissur, Palakkad, Kozhikode, Wayanad, Kannur and Kasargod districts are under a rain warning. Low pressure has formed near the Odisha-Bengal coast which may lead to continuous rains. The Meteorological Department has also informed that there is a possibility of widespread rain in the state till the 10th.

Landslides are likely in areas that have received heavy rainfall. Caution should be maintained in hilly areas. Flows in rivers will be strong as rain continues in the forest and hills and limited release of water from dams. Do not enter water bodies.

14,723 people live in 378 camps. The landslide occurred in Kundala Estate Pudukadi Division on Munnar-Vattavada road. No casualty. Three shops, two roadside auto-rickshaws, a Vinayaka temple and a water tank were destroyed. Rain has reduced in Kottayam. A man went missing after his boat overturned in Elikat Colony near Kojancherry.

13 families in Panur Narikotumala, which is threatened by landslides in Kannur, have been relocated. Kuttanad and Upper Kuttanad regions are worried as the inflow of easterly water continues in Alappuzha.