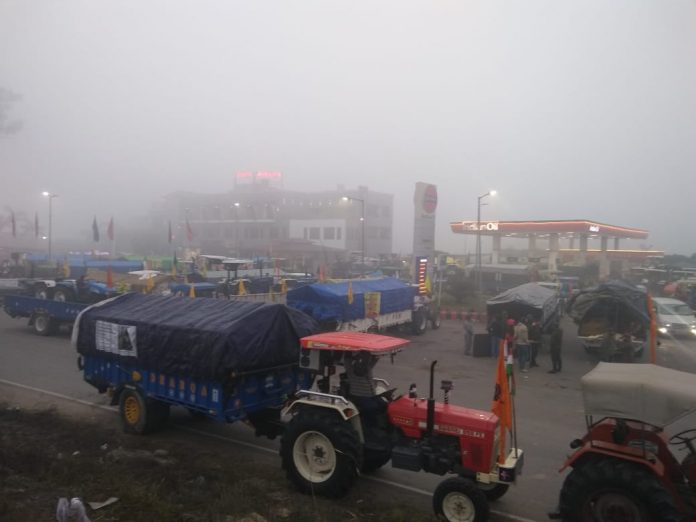 New Delhi: Tensions are high on the Singhu border in Delhi as farmers continue their strike. People from villages like Bakhtawarpur and Hamidpur in north-west Delhi reached the Singhu border to protest against the farmers. Between 70 and 100 locals arrived on the scene.

Meanwhile, leaders of 16 opposition parties issued a joint statement saying they would boycott the president’s speech in parliament on January 29 ahead of the start of the budget session. The move comes as they collectively demand the repeal of the three agricultural laws and show solidarity with the protesting farmers.

Opposition members from the Congress, CPI (M), CPI, NCP, DMK, TMC, Shiv Sena, Samajwadi Party, RJD, and PDP will boycott the speech. Opposition leaders said in a joint statement that the legislation was an attack on the rights of states and a violation of federal values.

The Kisan Morcha on Wednesday said that two farmers ‘unions had withdrawn from the Samyukta Kisan Morcha, a coalition of farmers’ organizations, following a tractor rally on the eve of Republic Day.

BK (Bhanu) and Rashtriya Kisan Mazdoor Sankadan withdrew after protests on the Delhi border. Meanwhile, farmers’ leader Darshan Pal said the protest would continue and that nationwide protests and hunger strikes would be organized on January 30.
The farmers ‘organizations alleged that the farmers’ organizations were not involved in the incidents that took place on Tuesday and that the police were the reason for the rally. The Joint Kisan Sangharsha Morcha, a group of farmers ‘organizations protesting against agricultural laws, said that some of the aggressors had infiltrated the farmers’ rally and had nothing to do with them.
Meanwhile, 22 cases have been registered against farmers, including leaders of the strike, in connection with the violence. Most of the cases are for the destruction of public and private property, including the Red Fort. 200 people taken into custody by Delhi Police About 300 policemen were injured in the violence. Twitter on Wednesday temporarily frozen the operation of 550 accounts that called for violence. It is not clear whether this is on the instructions of the Central Government.