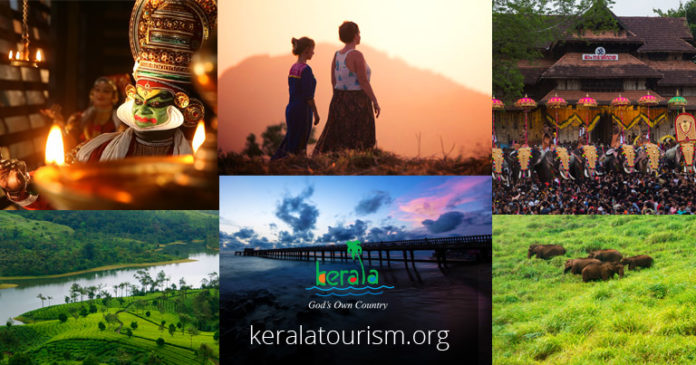 Thiruvananthapuram: Giving a formidable push to its East Asia initiatives, Kerala Tourism showcased a wide spectrum of its alluring products and services in thriving markets of China, Singapore and Japan this month, in renewed efforts to raise the profile of the state as a must-visit destination and ensure its brand visibility.

As part of its strategy to aggressively promote the state in the China market, a high-profile delegation of Tourism Department, which included leading trade partners from the state, participated in China International Travel Mart (CITM) 2019 at Kunming and also organised two roadshows in Shanghai and Beijing.

Tourism Secretary Smt. Rani George, who led the delegation, made a presentation on the tourism products and potential of Kerala at the trade meets in Shanghai and Beijing.

Dr. Acquino Vimal, Deputy Chief of Mission, was the Chief Guest at the Beijing show, where India Tourism also participated. The Kerala event was attended by 84 buyers and representatives of prominent media establishments.

As for the roadshow in Shanghai, business sessions were held between tour operators from the Chinese city and members of the Kerala trade. Shri Anil Kumar Rai, Consul General, was the Chief Guest at this event, which included 80 buyers.

At CITM, Kerala had set up a 36 sq.mt stand at the trade fair, attracting a steady stream of visitors and business stakeholders.

“We need to make Kerala hospitable to China’s outbound tourists as the world’s most populous country has the potential to give a fillip to the tourism economy of the state. We need to pique their interest in Kerala through a multi-pronged strategy. We are looking into the issues like paucity of guides well-versed in Chinese language. Additionally, we have to rustle up new products, especially in the adventure segment, promote MICE tourism and latch on to martial arts Kalaripayattu and wellness product Ayurveda in a big way,” he added.

“We are determined to put Kerala firmly on the radar of globe-trotting Chinese travellers and create awareness among them about God’s Own Country. By organising the roadshows, we were able to whip up a lot of excitement among the stakeholders of China’s tourism and hospitality industry,” Smt. George said.

“Besides developing B2B contacts, we also sent a strong message to the Chinese travellers that Kerala is a safe, attractive and affordable tourist destination. We need to be ready with package and customised tours to attract them,” she added.

Kerala has become the first Indian state to be partnered with the ‘China Ready’ programme, which has already been conducted in 48 countries, to increase footfalls from China. A destination audit from Chinese tourist’s perspective to ascertain the attractiveness of the destination has also commenced in Alappuzha, Thekkady, Munnar and Kochi.

In Singapore, Kerala Tourism participated in ITB Asia 2019, Asia’s leading travel trade show’ held at the Sands Expo and Convention Centre, Marina Bay Sands. The Kerala pavilion, set up on a 24 sq.mt area, was splashed with the theme of “Human by Nature”, a three-minute new campaign film launched to appeal to high spenders and backpackers. Large backlit wall of the theme attracted a lot of visitors while brochures were distributed to potential tour operators.

A string of meetings were scheduled in the Kerala Stand between leading outbound tour operators and travel publications in the stand. Alongside, B2B meetings with the trade partners from Kerala were also held, opening doors for Kerala as a renowned destination in the product catalogue of Singapore-based operators.

Singapore, a leading market for Kerala in terms of tourist arrivals, sent 9,460 tourists to the state in 2018.

Kerala Tourism also participated in Tourism Expo Japan, which was organised for the first time in Osaka. The event attracted more than 225,000 visitors and representatives of over 1,000 businesses from 130 countries. The co-exhibitors from Kerala held meetings with tour operators and media from Japan to create awareness about the state. As part of the promotional activities, a roadshow was organized in Tokyo.

In 2018, Kerala’s backwaters and Ayurveda had attracted 15,665 tourists from Japan, which was a 17% increase over the previous year.

Idukki: Three more shutters of Idukki Dam were raised. Due to the increase in water level in the dam,...
Kerala News

A camera attached to a helmet will be punished; License will be canceled for three months; a 1000 fine

Thiruvananthapuram: The Transport Commissioner has directed to cancel the driving license of those who attach a camera to their...
- Advertisment -

Post offices will be open on Tuesdays and Sundays; This is...

Chance of heavy rain in the state; Yellow alert in nine...