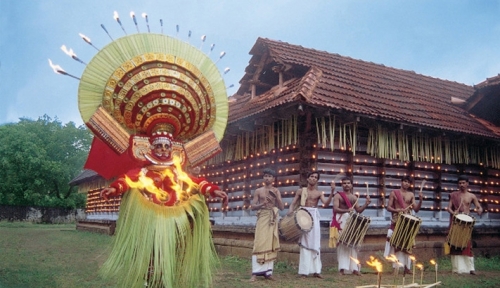 Kerala Theyyam : The Manifestation of Divinity

More than a folklore art, Theyyam is a ritual form of worship which has been originated thousands of years ago, probably during the Neolithic era. There are instances to believe that the primitive tribal religious worship has metamorphosed to the Theyyam cult which is prevailing in North Malabar. This is evident by the fact that several characteristics of tribal worship including ancestor worship, spirit worship, animal worship, serpentine worship etc are included under the Theyyam. Besides, the mother goddess or the Bhagavathy too has a prominent place in the Theyyam cult.

At present the Theyyam cult is predominantly exists in the erstwhile “Kolathunadu” which includes the present day district of Kannur and Kasarkode apart from several areas in other districts including Wayanadu, and Kozhikkodu. Theyyam exists even in some parts of Karnataka and Tamil Nadu.

Although the Theyyam has evolved from the ancient tribal worship, the developments in Hinduism influenced it considerably. The three main streams of present day Hinduism, Shaivism, Vaishnavism and Shakthisam is clearly visible in Theyyam cult too. However, in all theyyams the rituals to propitiate the deity are almost same and it has many similarities with those ancient tribal practices. Offering of animal blood is also included in it. However, the influence of Vaishnavism which strictly promotes vegetarianism, some of the rituals including offering of blood has been shifted to an area outside the shrine. However, the influence of Vaishnavism on Theyyam is not much as there are only two theyyams belonging to this category and they are “Vishnu Murthy” and “Devathar”. Most of other theyyams belong to the other two streams Shakthism and Shaivism. All theyyams including that of heroes, ancestors, spirits etc too belong to either of these two categories.

Consecration of temple by Brahmins is a recent practice in Kerala and in ancient days, many rulers used to consecrate their favorite devotees in their houses and used to worship them. Out of devotion, they have constructed many temples, popularly known as Kavus and consecrated the Theyyam deities. Theyyam dancers perform there on the annual festival days. The dancers belong to the lower casts in Hinduism but command greater respect especially when they perform Theyyam. According to the belief, the dancer who performs Theyyam Dance will turn to the deity which is represented by that theyyam. Villagers, including the rulers and those elites belonging to the upper casts will seek their blessings.

Theyyam performers will have to perform several rituals and as a preparation, they will have to lead a typical style of life for about a month’s time. Consumption of alcohol, non-vegetarian food and sexual intercourse is barred for them during this period. A theyyam may last for about 12 to 24 hours including several intervals. There is no specific stage for performing theyyam and it is usually preformed in houses or temple in open air.

In the beginning the main performer will come with drummers and recite several folk songs that depict the legend of the deity which is consecrated there. This is meant for propitiating the deity and to invoke the power. After the primary ritual the performer will go to the green room and will return in complete costume. Face painting is important and there are several patterns of face paintings. Some of the major patterns are vairadalam, kataram, Kozhipushpam, Kodumpurikam and Prakkezhuthu. Both primary and secondary colors will be used in contrast.

After coming in full costume, the performer stand in front of the deity for quite some time and gradually metamorphose into the deity. After that it performs many rituals all are different types of dance and at the end of it he will sat on a wooden stool called Peetam and start blessing the devotees one by one who comes near him.

According to a rough estimate there are about four hundred types of Theyyams belonging to different deities including ancestors, war heroes and animals. The costume, style of dance and the rituals performed after metamorphosing into the deity differ from Theyyam to theyyam but the core of the rhythm upon which the folk songs are played will be one and the same. This is just another evidence that establishes that Theyyam has been evoloved from the primitive tribal form of worship where drum beats and rhythm had great importance in invoking the divine power.

Kaliyug a series of acrylic paintings by the talented siblings - Rishikesh Kalyan and Manasa Kalyan, displayed at the...
Arts & Culture

Kochi: A curiously compact living space is all set to attract eyeballs in downtown Ernakulam alongside the three-day Kochi...
Arts & Culture

Like based on many of the beliefs, there is a lot of celebrations in India that do not have...
- Advertisment -