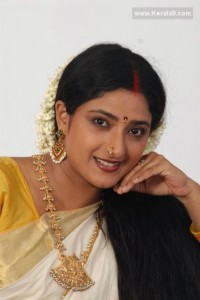 Actress Praveena ,She made her acting debut in Dr.Shivaprasad directed movie Gowri written by T.Padmabhan , which was an Indian panorama selected movie. In a career spanning thirteen years, she has appeared in over twenty films, five mega serals in Malayalam, Tamil, and Other languages, while winning state awards in 1998 for Agnisaksh by Shyamaprasad & in 2008 for Oru pennum randaanum directed & Adoor . She has performed classical events in more than 50 temples and also sung in various albums across south India and also performed in hundreds of stage shows .Recently She got Asianet Television Award 2011 – Most Popular Actress.Today being her birthday, Kerala9.com takes this opportunity to wish her a very happy birthday.May her career be filled with more and more versatile assignments and projects! A very happy birthday!