Rambha Gets Married In Tirumala Pictures,Photos,gallery 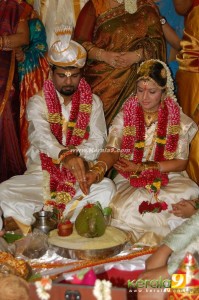 Popular south Indian actress Rambha married Indra Kumar Padmanathan, a Canada-based businessman, in a temple in Tirumala on Thursday, April 8. The wedding was a private affair, and was attended by close friends and family. The reception, on the other hand, is expected to be a star-studded event. It will be held at Rani Meyyammai Hall in Chennai on April 11.(We will update photos )

Rambha is the brand ambassador of Indhiran’s company Magic Woods, and Indhiran had approached Rambha’s parents asking for her hand. The couple was engaged at Hotel Park Sheraton in Chennai on January 27.

Rambha – who acted in over 100 films in Telugu, Tamil, Malayalam, Hindi, Kannada, Bengali and Bhojpuri – says she will continue her stint as an actress, but will now be choosy about her roles. Telugu audiences know her for her roles in Allari Premikudu, Bombay Priyudu, Hitler, and Bavagaru Bagunnara, among other films.